More Reasons I Drank in the Infantry 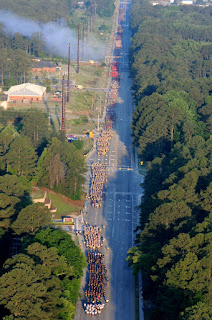 Three more reasons why I hit the bottle a bit too hard in the infantry:

Noncommissioned Officer Education System (NCOES): This is the common core curriculum of the Army. These are the only schools you can come out of dumber than you went in. In Warrior Leader Course, I had a female Staff Sergeant mess up the map reading class so bad that I got confused, as if I learned it incorrectly. You want to know philosophy and question consciousness and existentialism? Then get taught land navigation by someone who has no idea what the fuck they are talking about. You’ll begin to question everything, “Did I learn this wrong? Have I been applying this wrong my whole career? Did I really pass this the other day? Am I really here? What if I am not here...shit, what if I am dead...because I got us lost in Iraq and this is my punishment?” Then she said something like, “What’s this called again, Oh yeah, a grid square..and this is a scale..no, it’s not? I mean it is a protractor”. At that point, I snapped out of my philosophical ponderings and realized she was just retarded. Have fun in either sandbox, lady, you’ll need it and so will your soldiers.

Online Courses: This is a great example of good initiative, bad judgement. During morning notes, the call goes out. You guys have to get your squad up to date on the quarterly Sexual Awareness Cyber Challenge. Now, there are a few ways to accomplish this.

Battalion/Brigade/Division Runs: Hey Leaders, nothing motivates us soldiers more than waking up an hour before physical training in order to form up ten times as we eventually make our way to a massive formation. There, you’ll massage your ego by saying...what did he say? I guess no one will ever know except for the first two rows out of the 500X500 formation that is in front of you. Then we will wait a half an hour before we start. Finally, we get to start running, shit, hurry up, hurry up, SLAM on the brakes, hurry up, hurry up, SLAM on the brakes. Meanwhile, the fat Platoon Sergeant is excited because he knows this is the only run he won’t fall out of. His day has come and he proceeds to let loose a stream of insults on anyone that looks like they might fall out. Didn’t speed up during the last yo-yo effect? You’re a disgrace and how would you like to see him after the run? Meanwhile, the private that always has to take a shit, has to take a shit. He takes off to the woods never to be seen again while the fat private that always falls out of everything is pretending his shoes are untied. I am not falling for that. Suddenly, it is your turn to call cadence. This is a truly odd feeling to call cadence in a mass of people calling different cadences. You start singing something about blowing all the hajji’s away when your politically correct First Sergeant turns around and sends you a death stare. I guess that one is out the window, no more killing haj. As you finish the run, you look around and notice the fat PSG has fallen out. I guess his day hasn’t come. Mercifully, the run is almost over, you get back and form up. Then you play the game where the commander wants everyone to come closer so they can hear him. A mob of 3,000 soldiers then descends on him while he talks about how great we all are and remember, safety first. After the Sergeant Major repeats exactly what the Commander said, we play a fun game of forming back up. 3,000 soldiers try to form back up in two seconds while every E5 in the Brigade says things like, “just stop moving” and “lock it up”. Finally, you get released only to be told to be back at the company at 0845 for online training. It must be completed by the end of the day or no one is going on their four-day.

For more frustrating examples, check out part one here or part three here.
Posted by TPB at 10:30 PM