A Journey into the Soul of an Infantryman

I bounded down the stairs from my balcony, excited by the sudden surge of motivation to go for a walk in the woods. It had just finished raining, and the woods, though dark and ominous, called to me. You see, warriors are drawn to the dark and ominous. We seek danger and the unknown, and we are always ready to embark on the next crazy adventure. As I begin to enter the thickest part of the forest, the branches and leaves, soaking wet from the rain, pushed against my legs, soaking my tan cargo pants. I felt them grow heavy and uncomfortable. It was a feeling I had not felt in some time. Slowly, the door to the past began to creep open, and I felt memories start flooding in. Patrolling in and out of swamps in Louisiana. Wading through irrigation canals in Iraq and Afghanistan. Doing the ghillie wash in Sniper School. I stopped and took a moment, dropping to a knee to fully immerse myself in the memories. I thought of my assault pack sitting on the floor of my basement and considered turning around to get it; not because I was planning a long hike but because I wanted to feel like an infantryman again.


Thinking of my assault pack reminds me of the missions I had endured in Iraq and Afghanistan. As an infantryman, there is no better feeling than when on patrol and your stomach hurts from hunger. You are fighting to keep your eyes open, you’re soaked to the bone, and, more than likely, you are shaking uncontrollably. Some soldiers may feel like it sucks at the time, but it is a feeling you yearn for when you are no longer completing missions. And so there you are, carrying a ruck that weighs almost as much as you, ready to push onto the objective with your wolfpack. There is no better feeling in the world. This is not some misguided attempt to display how much of a badass I am. Rather, it is an attempt to articulate a feeling which the wolfpack knows all too well. 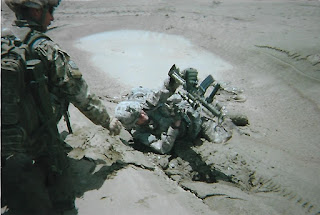 I have written before of a feeling that is acquired from years in combat- that of being the hunter and the hunted. That is one feeling, but there are many that hard men, like us infantrymen, have acquired. They are difficult to articulate if not experienced firsthand. I have to admit the word “feeling” comes up woefully short of what I am trying to describe. It is more of an experience of toughness, perseverance, camaraderie, resiliency...etc. Those are all great words that accurately describe our experiences, but don’t they sound too sterile? I have resigned to simply call it “the infantry feeling,” and for those who have felt it and lived it, well then you know you can feel it to your very soul; it makes you feel complete.

I will always remember the first time I felt this. It was during the FTX at the end of basic training in January 2001. The drills didn’t tell us how far we were going as we set out in staggered columns; it felt like we were walking all night. In all, we road marched fifteen miles out into the Georgia wilderness, not arriving to our patrol base until sometime around two in the morning. Tired (and new to this life), we fumbled through the priorities of work as we set up security and cleaned our weapons. Self-care was at the bottom on the list of priorities.  One by one, we pulled off the perimeter, and with dirty and sometimes bloody fingers, we cleaned our weapons until they were cleaner than ourselves.

One time, as I finished cleaning my rifle, it began to drizzle. It was cold that day, the temperature was hovering a little over freezing and that southern chill permeated through the air. All infantrymen know that southern chill because it cuts into you deep, going directly to your bones. We had been in the field for three or four days and I was already out of fucks. So, I simply leaned back for a few minutes and took in the moment. A spiritual SLLS (Stop, Look, Listen, Smell) if you will, which was meant to take me away from the task at hand. However, what I discovered was that I did not want to be taken to some better memory. I enjoyed the moment I was in. Little did I know that at that point, I was merely dipping my toe into the infantry pool. Like an addict who just took his first hit of drugs, I was hooked.

There were times that I felt more like an infantryman than others. Remember taking a knee as you waited in the chalk for the Blackhawks to come? Before the mission, there would be nervous anticipation as one million possible scenarios ran through our heads. Within each soldier, a private war was taking place as we considered our jobs, other soldiers, and our own mortality. As pick-up drew closer, the chalk would be alive with excited banter. We talked shit and wondered what lay ahead. The unknown is a new adventure for the warrior; he faces it head on, fearful and nervous, but ready to face anything as long as it is with his friends.

These were moments of individuality where I would get lost in the feeling of being an infantryman. A moment where I stopped thinking about everything and simply enjoyed existence. A moment where I gave up control and immersed myself in the space and time I occupied. On a knee, at the front of my stick, I would watch the helicopter appear on the horizon. I could feel the weight of my assault pack over my shoulder, feeling the reassuring cold steel of the rifle in my hands. I knew I could die, and it would probably be a horrible death. But it didn’t matter because in that moment, I knew exactly who I was and what I was doing. I felt complete; both invincible and ready for death. The helicopter would land, and just like that, the moment would be over. I would be Staff Sergeant Waterman again. I would get up, wave the stick to follow me, and move out toward the Blackhawk, stopping right before the bird to count my guys on. I would always take note of who stooped their heads as they passed under the blades; it showed inexperience. Privates and Lieutenants always did, but I remember being highly amused when senior officers and NCOs did as well. My soldiers would drop their assault packs just outside the door as they loaded onto the bird, and once all were on, I would shove the assault packs in and jump on myself. Shaking from the vibrations of the aircraft, with adrenaline surging through my body, I was ready for the hunt.

A scampering from somewhere nearby brought me out of the past and into the present. While lost in my thoughts, it had grown dark, and the stars had come out. Shaking off the last pangs of nostalgia, I looked up at the night sky and saw the familiar constellation of Orion, The Hunter. I thought about how fitting it was to find that first. I picked out Venus and looked at the impact craters on the Moon. A commercial jet flew over, probably on its way to Bangor. I wondered if anyone inside the plane was looking down on me at that time. I felt small and humbled. I considered how the moments that I hold onto so tightly will be lost into the dustbin of human memories once I die.

I looked at the outline of the mountains surrounding me and thought of them being here long before me and continuing to stand tall long after I am gone. It made me think that life truly is a series of moments which can be extinguished at any time. It appears there is always another minute, until there isn’t. We infantrymen know this feeling better than anyone. In a moment, the world, which was just under your control, explodes into chaos. It is another moment, another memory, burned into your soul.

With that thought, I stood and started making my way back to my house. It does me well to remember my past as I consider my existence. It grounds me and gives me the perspective I need to peer into the future as I consider my choices. In the end, all we have are past memories we hold onto, and future dreams that may never come to fruition. It is this moment right now that we need to seize and take advantage of. Sit in the moment, feel what you feel, and appreciate simply being. Remember who you are and where you are going. I love feeling like an infantryman. I like the feeling of the hunt. I am working my way back over to where the fight is. It is who I am and what I want to do. The warrior spirit truly does die hard. 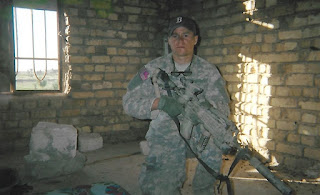