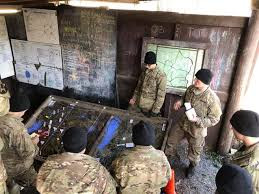 Lately, many people have been asking me what type of plate carrier they should buy. There seems to be some sort of revolutionary spirit rising in this country, but I cannot quite put my finger on it. Anyway, I always follow their question with one of my own, what do you plan on doing with it? Like every other tactical or strategic decision, whether you wear a plate carrier depends on METT-TC. This is a concept which the current military cannot understand. They know how to analyze, but not in the current situation.

So, what is METT-TC? METT-TC is an acronym that stands for mission, enemy, terrain, troops available, time, and civilians on the battlefield. The acronym is used to help commanders remember and prioritize what to analyze during the planning phase of any operation. Let us break this down further to how a current military leader thinking in the second generation (2G) of warfare might analyze each letter in the acronym and compare it to how a fourth generation warrior (4GW) might be thinking.

Mission: What is the purpose of the operation and the commander’s intent?

(This is the generally the same in fourth generation warfare (4GW), but it is decentralized so that it is not hierarchical. For example, Al Qaeda’s mission was to free Iraq. It was up to their low-level fighters and individuals to figure out how. This made it so there was no head of the snake to cut off. No leaders=no targets. Especially for people who consider themselves as important as the media, speaking of which…)

Enemy: Who is the enemy? What are his strengths and weaknesses? What weapons do they have? What are their numbers? What are their capabilities? Are they motivated? Do they have high morale? Research and recon here are your friends.

(In 4GW, the media might be a way more important than any physical enemy like ANTIFA. In this scenario, if the media is more important than they would arm their troops with cell phones due to their cameras. This could potentially be everyone. Cell phones in the hands of useful idiots are more important than rifles because of the spin/propaganda…until the battle goes kinetic anyway and men’s hearts harden. This is where we are. Also, as we saw in the Sandmann case, the camera works both ways. Think outside the box. Like the colonists did when they dressed up like Native Americans and threw tea in the harbor. Imagine what conservatives could do if they dressed all black as ANTIFA and did…)

Terrain: Where is the fight? Historically this has meant the physical terrain of the battlefield. Are you fighting in the rugged mountains of Afghanistan or the humid, jungles of Vietnam? During a kinetic fight, Commanders will use the acronym, OAKOC for a more detailed analysis. OAKOC stands for observations and fields of fire, avenues of approach, key terrain, obstacles, and cover and concealment.

(In 4GW, the fight is everywhere in every space occupied. It is at your work, online, at the grocery store, It is all encompassing and exhausting so pace yourself, get off the social media that is toxic. Additionally, on a physical battlefield an Army might conquer hills or cities to win a war as in WWII. But what happens when an enemy view the cultural high points as hills to be won, like in 4GW? A long war which captures “hills” of Academia, the media, politics, Hollywood, etc. and then uses those hills to direct propaganda (machine gun fire/mortars) down at the regular citizens in order to demoralize and take over, whoever that is or might be…)

Troops available: This does not just stand for how many troops you have available. What are your troops capable of? Consider the Ranger big five in this category and how well your troops are trained in them: marksmanship, medical, mobility (how quickly your troops can deploy and maneuver) physical fitness, and small unit tactics. What is their morale?

(In 4GW, the Ranger Big Five is still very valuable. However, you can use your strengths in one to offset the others. For example, in an insurgency we used to react to single shot rifle fire as sniper fire. It did not matter if it were accurate fire or not, a single rifle shot could stop our movement for quite some time. It was a big deal. The ability to blend back into the sea of people hid the fact that the shooter might not be able to hit the broad side of a barn or could run 100 meters without passing out. The will was there to take the shot and that was all that mattered. That was in a kinetic 4GW fight. In the current situation of information warfare, you will be faced with the omnipresent news reports about how any resistance is futile and we are always losing. Think about this one carefully.)

(Time is not the same in the different generations. Iraqi time during our occupation was different that American time. Iraqis were there before, during, and are there now. They could operate as slow as needed, hence the low intensity conflict. An IED here, a sniper attack there, a raid on the police here, and mortar attack there will inflict a slow stream of casualties. Death by a thousand cuts is real.)

Civilians of the battlefield: This is one that was added in my lifetime and it is important due to the moral side of warfare. Who are the people on the battlefield you might interact with? What are their mindsets? What is a normal day of life for them? How might they be exploited to further the mission.

(The local population is everything in 4GW. What they will tolerate will allow you to operate. What they do not tolerate, well, the city will come down on them. I was there in Lutafiyah in 2003 when the city came down on a Spanish Special Forces Team which had been compromised. It was not really in the news but only one soldier survived. The rest were, tortured, mutilated, and killed. Here isthe link for the operation we launched a week later. The point is to win the mob. If you control the mob, you control your objective/mission, but only if you value the people. In the US, present day, the media controls the mob. That should tell you the mission.)

That is a brief run down on METT-TC. Getting back to the question that I have been asked a thousand, million times of what type of plate carrier to purchase? Well, that is METT-TC. You will have to ask yourself these questions. What is the mission? Are you an imperial soldier clearing rooms or are you an insurgent where speed is security? Who are you and what are your strengths and weaknesses? Who is the enemy? In what environment do you operate? Are you a welder by day and sniper by night like in an insurgency? Or are you a professional soldier in a foreign land trying to install democracy on a people who do not want it? Who are the people around you, freedom lovers or communists? Christians, Moslems, or atheists? All valid questions and worth addressing.

So, in the end I guess I must answer. I am a retired soldier. I fought against a light weight, determined enemy who ran circles around us for years. They did not wear body armor. They barely wore anything. The ones we killed and got an up-close look at them were wearing a vest with maybe 4-5 AK magazines and a few grenades. They knew the importance of speed in a fight against the empire. I knew the importance of speed against me. Speed and stealth. Get a job, blend in, operate out of the shadows. I do not have any body armor and I never will. And that I guess is my final point. Raptor 2, out. 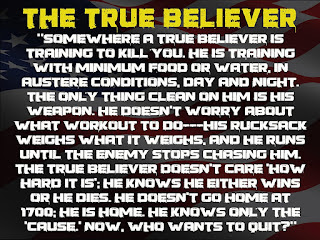