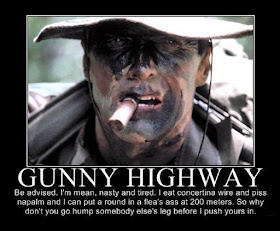 First, I am not a Marine. I am a proud Army Grunt (Retired). However, I have always appreciated the Marine Corps even if they are the Army’s slightly autistic, younger brother. Why autistic? Because when they are on mission, they are fucking focused. No other branch has to do more with less. I’ve worked with them more than a few times and I was always impressed by a Marines ability to cut through the bullshit and get to the point. That and they are some of the most professional, patriotic, and hard men in any military around the world. In least they were during the war years. (The majority of their snipers/infantrymen, anyway, I cannot speak about the others.) You just know the person who gets the ball rolling for the future unpleasantness will be a Ranger, Sniper, or Marine. (Or all three in one!!)

Anyway, that is why I used to borrow from their library when I was in the Army. You can clearly see their no bullshit attitude as you read the Marine Corps Doctrinal Publications. I know the first one, Warfighting, was heavily influenced by William Lind’s theories and we all know his contributions to warfare. I have never read a better guide which explained the best way to fight a war in multiple generations. These are just a couple which I think are most relevant to the current situation. Enjoy. 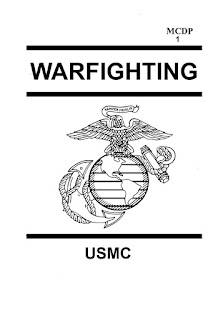 "In war the chief incalculable is the human will. " —B. H. Liddell Hart

"The political object is the goal, war is the means of reaching it, and the means can never be considered in isolation from their purposes. " —Carl von Clausewitz

"The essential thing is action. Action has three stages: the decision born of thought, the order or preparation for execution, and the execution itself All three stages are governed by the will. The will is rooted in character, and for the man of action character is of more critical importance than intellect. Intellect without will is worthless, will without intellect is dangerous.” —Hans von Seeckt

"Speed is the essence of war. Take advantage of the enemy's unpreparedness; travel by unexpected routes and strike him where he has taken no precautions. " —Sun Tzu

"Many years ago, as a cadet hoping some day to be an officer, I was poring over the 'Principles of War,' listed in the old Field Service Regulations, when the Sergeant-Major came up to me. He surveyed me with kindly amusement. 'Don 't bother your head about all them things, me lad,' he said. 'There 's only one principle of war and that's this. Hit the other fellow, as quick as you can, and as hard as you can, where it hurts him most, when he am 't lookin’ " —Sir William Slim 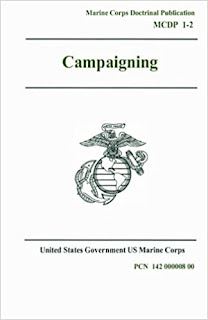 "For even a decisive battle be the goal, the aim of strategy must be to bring about this battle under the most advantageous circumstances. And the more advantageous the circumstances, the less, proportionately, will be the fighting. " —B. H. Liddell Hart

"We must make this campaign an exceedingly active one. Only thus can a weaker country cope with a stronger, it must make up in activity what it lacks in strength. " —Stonewall Jackson 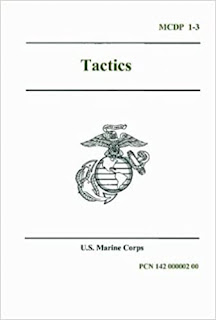 "We must be ruthlessly opportunistic, actively seeking out signs of weakness, against which we will direct all available combat power. And when the decisive opportunity arrives, we must exploit it fully and aggressively, committing every ounce of combat power we can muster and pushing ourselves to the limits of exhaustion. " —FMFM 1, Warfighting

"In war the power to use two fists is an inestimable asset. To feint with one fist and strike with the other yields an advantage, but a still greater advantage lies in being able to interchange them—to convert the feint into the real blow if the opponent uncovers himself " —B. H. Liddell Hart

"Hit quickly, hit hard and keep right on hitting. Give the enemy no rest, no opportunity to consolidate his forces and hit back at you. —Holland M. Smith

"For the infantryman to be truly effective. . . he will have to be as light of foot as he is quick of thought. . .. Mobility is needed most of all in the clash of arms. Swift and agile movement plus rapidity and intelligent tactical flexibility are its true essentials. " —John A. English

"Do not delay in the attack When the foe has been split off and cut down, pursue him immediately and give him no time to assemble or form up. . . spare nothing. Without regard for dyjIculties, pursue the enemy day and night until he has been annihilated. " —Field Marshal Prince Aleksandr V. Suvorov

"Pursue the last man to the Adda and throw the remains into the river. " —Field Marshal Prince Aleksandr V. Suvorov 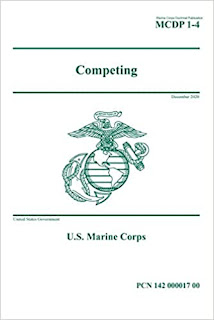 “Total war and perfect peace rarely exist in practice. Instead, they are extremes between which exist the relations among most political groups. This range includes routine economic competition, more or less permanent political or ideological tension, and occasional crises among groups.” —MCDP 1, Warfighting

“The most important task for Marines and the Marine Corps is to recognize that we are always competing. Even choosing to do nothing is a competitive decision, it just happens to be one that surrenders the initiative to our competitors.” – MCDP 1-4

[C]ompeting effectively requires knowing your competition intimately. Only by understanding a competitor’s worldview, decision making, and behavioral proclivities can one outmaneuver that competitor; only by grasping a rival’s weaknesses and fears can one exploit them. Such understanding, in turn, requires sustained intellectual and economic investment. —Hal Brands

Competing is a way of thinking. Like maneuver warfare, it is a state of mind born of boldness, intellect, initiative, and opportunism. It is about understanding our competitor’s system so that we can develop, sustain, and adapt our competitive advantage, so that the Marine Corps will always be a useful tool for the Nation in the enduring competition that is the normal state of international relations. -MCDP 1-4

Good luck out there. Work together or die individually. Your prepping won't mean shit without buddies to help you defend and counter. You will just die in your holes and resupply the enemy with your shit. Raptor 2, out.