Keep an eye on this man. Don't let him fade away as he has sacrificed much in pursuit of accountability and truth. Additionally, LTC Scheller is going through a struggle that many of us have been through in the last few years. You should recognize where he is at. He is discovering the lies that has guided his life up until this point. He is realizing the waste of the last twenty years of constant warfare. LTC Scheller is righteously angry and does not know what to do about it. Many of us are.  As a retired Army Infantry NCO, I made a similar journey not too long ago and I understand his sadness and sense of loss.

I was in Ghazni, Afghanistan in 2010-11 at the same time LTC Scheller was and know the fight he went through. There was a time at the peak of fighting season when we could not even leave the COP without getting into a two-three hour firefight. One thing that annoys me from the many websites I read is how we lost to illiterate goatherders who hid and fought from caves with rusty AKs. In my experience, this could not be further from the truth. Some were illiterate, however, that was far from the enemy I fought against.

I saw men who could make a bomb out of anything and constantly evolve it to counter our ever changing tactics and technology. They lived amongst the villages/tribes and knew exactly when to attack and when to blend in. They weren't good at PT nor could they shoot well, but they knew exactly who they were and who their enemy was and fought accordingly. They kept fighting even when down to the last man and surrounded in field by a platoon, with  Apaches circling overhead. They were true believers and Americans would do well to study them instead of dismiss them as goatherders with rusty AK's.

There are still some of us true believers out there, floating around feeling like cowards as our nation is over run and conquered. There is more than a bit of Viking blood which runs through my American veins and it boils as I watch what weaker men and traitorous women do to my people. Many of my readers feel the same way. Remember that as we watch LTC Scheller struggle with the reality of the current situation of the former USA. We have been there and need to cheer on/guide the pilgrims as they discover the truth and make their way over the great divide to our side. Their/our anger is just and there will be consequences. How that will manifest...none of us knows. Stay hard, stay motivated, and don't give up one more inch to the evil which advances. Raptor 2, out. 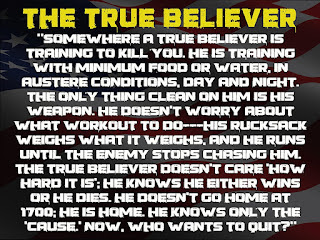