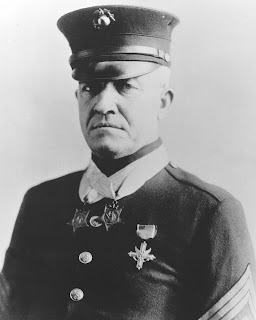 Sergeant Major Daniel "Dan" Joseph Daly was once acclaimed by MajGen John A. Lejeune, former Commandant of the Marine Corps, as "the outstanding Marine of all time." MajGen Smedley D. Butler called him "The fightinest Marine I ever knew," and wrote that "it was an object lesson to have served with him."

This kind of praise was generally expressed by Marine officers and enlisted men alike and, according to the record, Dan Daly deserved it.

Sergeant Major Daly and MajGen Butler are the only Marines who have ever received the Nation's highest military award-the Medal of Honor-twice for separate acts of heroism.

A small man (five feet, six inches in height and weighing only 132 pounds), SgtMaj Daly nevertheless was a fine military figure, erect and well-proportioned. His keen gray eyes looked upon danger without fear. Although a "natural" for publicity, he disdained it and disliked all the fuss made over him. He termed medals "a lot of foolishness." Personally he enjoyed a pipe, crammed with cut plug tobacco, but did not drink.

He was a strict disciplinarian, yet fair-minded and very popular among both officers and enlisted men. He was noted not only for his reckless daring, but also for his constant attention to the needs of his men. Offered a commission on several occasions, he is said to have declined on the grounds that he would rather be "an outstanding sergeant than just another officer."

Sergeant Major Daly is perhaps best remembered for a famous battle cry delivered during the desperate fighting in Belleau Wood in June 1918. Marines took a terrific pounding on the outskirts of Lucy le Bocage ("Lucy Birdcage" to the American Expeditionary Forces) at the fringe of Belleau Wood. They were outnumbered, outgunned, and pinned down. 1stSgt Daly ordered an attack. Leaping forward, he yelled to his tired men, "Come on, you sons of bitches, do you want to live forever?"